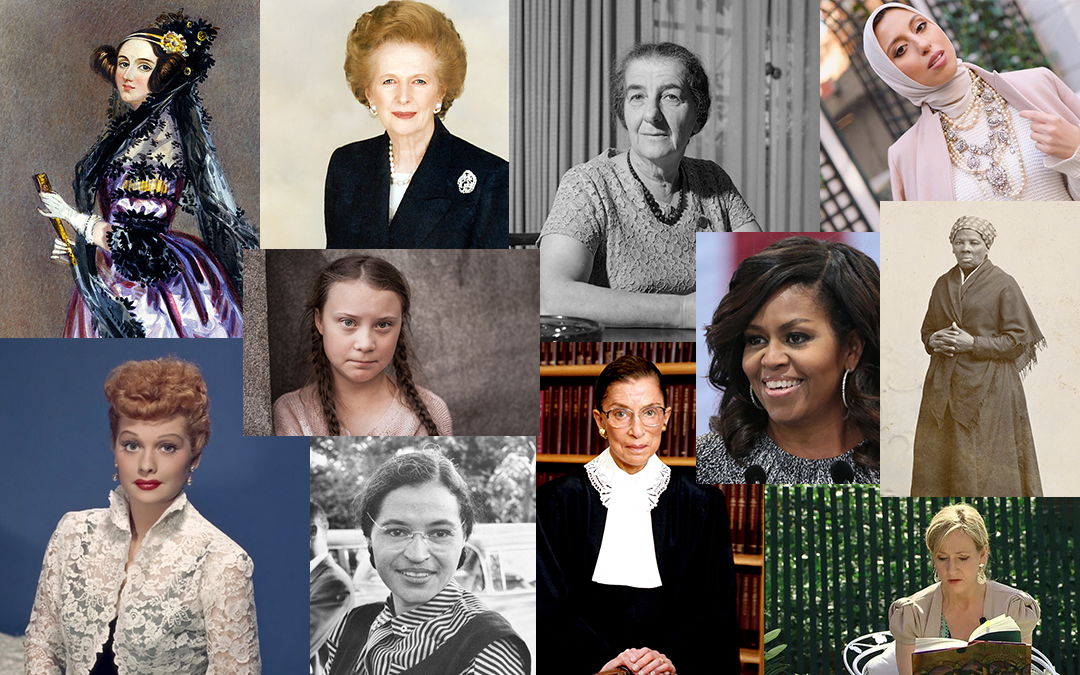 It’s International Women’s Day! On this day, we celebrate all the wonderful achievements of women throughout our history.

This year, we asked the powerhouse women of SSDM to nominate those who have inspired them throughout history, in the present time, and lastly, what legacy they want to leave behind.

Here’s what they had to say:

Historically: I’m inspired by Lucille Ball, an actress, and pioneer in American comedy, who also became the first woman to own and run a major production company (Desilu Productions). She created and starred in “I Love Lucy” in 1951, which was groundbreaking for its time and still resonates with viewers today.

Present Time: J.K. Rowling is an author who overcame adversity, rejection, and difficult life circumstances to become the author of one of the world’s most influential and successful literary franchises. She represents tenacity and resilience and continues to use her success and fortune to empower others (she fell off the Forbes billionaires list due to charitable giving).

My Legacy: I hope to continually promote peace, compassion, and genuine care for others throughout my life, inspiring others to do the same. I also hope that through continued education and hard work I’ll serve as an example to others to never settle.

Historically: Golda Meir, an immigrant and women’s advocate who helped found the State of Israel and became its first female prime minister. A strong woman in a man’s world.

Present Time: Condoleezza Rice, a smart, ethical, elegant diplomat with a decent golf handicap who aspires to be commissioner of the NFL. Another strong woman in a man’s world.

My Legacy: I hope to be remembered as a mentor, supporting new generations of leaders and encouraging them to mentor those coming along behind them.

“I’d rather be ignored than patronized.”  ~ Condoleezza Rice

Historically: Rosa Parks inspires me because of how persistent she was in exercising her civil rights. In a way, her actions spoke louder than words.

Present Time: Melanie El-Turk is an attorney turned CEO who turned her dreams into reality by leaving her law career to create a brand for an underrepresented market in the fashion industry.

My Legacy: I hope to be remembered as someone who broke down barriers and took on challenges that seemed unachievable.

Historically: Margaret Thatcher, as her influential presence helped to shape my leadership style and laid the foundation to accept nothing but the best for myself.

Present Time: Nikki Haley, a fierce, confident woman who has inspired me to not just swallow my pride in order to get through the day. “With all due respect, I don’t get confused.”

My Legacy: I hope to be remembered as someone who inspired others by my determination to define success in my own way and never give up on my beliefs.

My Legacy: I hope to be remembered as an inspiration to others by showing my own honesty, determination, and my overall quirkiness. I aim to always be there for others seeking advice and guidance.

Historically: As a pioneer of the modern Black hair-care and cosmetics industry, Madame C.J. Walker was a businesswoman who always made it a point to give back to Black communities and support causes to improve the lives of Black Americans. She was born on a plantation to formerly enslaved parents, worked hard her entire life and is a true inspiration.

Present Time: Michelle Obama, a lawyer, writer, mother, wife, and former First Lady, who is a role model for all. The graduate of two Ivy League schools, she decided her true calling was to encourage people to serve their communities and their neighbors and inspire young people to fulfill their boundless promise.

My Legacy: I hope to be remembered as the person people came to when they were doubting their skills or capabilities, and I reminded them who they are and what they can accomplish.

“When you’ve worked hard, and done well, and walked through that doorway of opportunity, you do not slam it shut behind you.
You reach back and you give other folks the changes that helped you succeed.”  ~  Michelle Obama

Historically: Harriet Tubman inspires me because of her unabashed courage in not only saving her own life but impacting the freedom of others. To be a woman, escaping from the bondage of slavery, is inspiring in itself; but to take that to the next level, and help others flee, shows bravery, tenacity, and audacity. She wouldn’t take no for an answer!

Present Time: The notorious RBG. Ruth Bader Ginsberg was smarter than the men in her Harvard class, fought for the respect she deserved, and yet still couldn’t get a job as a lawyer. But she persisted. She continued to fight for women’s rights and fought until she won. And her legacy continues as one of the first women to serve on the Supreme Court.

My Legacy: I hope that I helped to inspire and guide young women to navigate life and understand their contributions – to family, career, and friends. It’s different for everyone, but if I can help identify how they can fulfill all these parts of their lives – not defined by gender, but by talent and skill – I will be one step closer to success!

“Every great dream begins with a dreamer.
Always remember, you have within you the strength, the patience and the passion to reach for the stars to change the world.”  ~  Harriet Tubman

We honor the social, cultural, and political strides women have bravely taken to make the world a better place. Happy International Women’s Day!